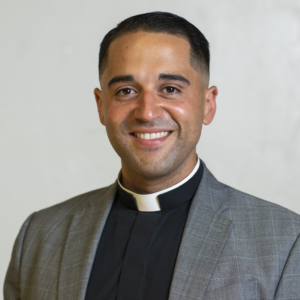 Matthew Ryan González was born on April 3, 1985 at Albert Einstein Hospital in the Bronx, New York to Obed and Evelyn González. He was baptized at St. Helena’s Roman Catholic Church in the Parkchester section of the Bronx. His family moved to New Jersey when he was four years old. There, they began attending Redeemer Lutheran Church of Manchester, NJ. At age 8, he became an older brother to Nicholas. At age 13, Matthew was catechized and confirmed at Redeemer Lutheran Church in Manchester. He attended both private and public elementary schools, Lakewood High School (in New Jersey) and Concordia College—New York. He earned a B.A. in theology along with a Fellows Honors degree, being graduated as the 2007 valedictorian.

Upon graduation, he entered the Masters of Divinity program at Concordia Seminary in St. Louis, Missouri. At Concordia Seminary-St. Louis, he studied for two years and completed his fieldwork assignment at St. Lucas Lutheran Church. During his time at the seminary, he played soccer and baseball for the school club teams. He also joined the intercollegiate basketball team in which he played guard during his years of study. In 2009, he was assigned to be the vicar of Trinity Evangelical Lutheran Church and Redeemer Evangelical Lutheran Church in the Bronx, New York, where he was ordained a Deacon. After completing his vicarage, he returned to the seminary for his final year of study. There, he received and accepted the Divine Call to be the Pastor of Trinity Evangelical Lutheran Church in the Bronx, New York. He was ordained into the Office of the Holy Ministry on The Presentation of the Augsburg Confession, June 25, 2011 at Redeemer Lutheran Church in Manchester, New Jersey.

Pastor G. is honored to serve as a witness of the beautiful work of the Lord, shepherding the people of God with the Lord’s guidance. Along with his pastoral service at Trinity, he also serves as the Senior Pastor & Executive Minister at The Lutheran Church & School of Our Saviour, also in the Bronx, New York. He also co-founded Lutherans For Racial Justice & The Unbroken Cord. Further, he is currently service as the chair of the Atlantic District Conference Committee and as a member of Atlantic District Task Force 5 (Youth). He has previously served as an Adjunct Professor at Concordia College—New York, as the Pastoral Counselor to the Atlantic District LWML (2014-2018), as the Atlantic District Coordinator for the LCMS National Youth Gathering (2013; 2016), as a Guest Editor of the Lutheran Forum of the American Lutheran Publicity Bureau (2014-2016), as a Bible Study Presenter at the LCMS National Youth Gathering in New Orleans, LA (2016), and as a founding member of the MOSAIC Initiative for the LCMS National Youth Gathering (2019).

Pastor G.’s interests include sports, traveling, and athletic activities. He also enjoys singing and playing music, especially as a member of the band, “Axe of the Apostles.” He is thankful to the Lord for every gift that he has been given, especially his beautiful wife, Katie and his precious children, Phoebe & Aaron. Pastor González is grateful for every aspect of the Holy Ministry, joyfully serving the Lord and His people so that others may learn of Christ’s grace, peace and love.